“Wild” Night out with the Boys

As you all know, I was born and raised in the Great Heartland of Minnesota. I became an avid sports fan early in life. In fact, my childhood life goals were to become a professional football player and a Rabbi. Eventually, I did become a Rabbi, but that didn’t interfere with my continued passion and skill at the running back and wide receiver positions – if I may say so myself!

Most of my spare time (and some of my class time…) was devoted to visualizing big plays by the Vikings, memorizing the batting averages of the Twins, and drawing up power-play formations for the North Stars.

Under my breath, I used to enjoy re-creating the play-by-plays of huge Viking touchdowns, for example, “Tarkington takes the snap at midfield. It’s a draw to Chuck Foreman! He takes it at his own 45! He blasts through the middle of the defensive line! He spins to the right, breaking two tackles… and he turns the corner! He’s up the sidelines! He deeks out a defender at the 40 yard line! Here come three defenders – one dives at his legs, another flies toward his shoulders, and a third tries to pull him down at his mid-section! Somehow, he emerges unscathed! He’s now at the 30 yard line! The 25… the 20! He MAY GO ALL THE WAY!! He’s at the 15, the 10… but there’s one man to beat! He somersaults over him at the 5 yard line! And he… WALKS… into… the… END ZONE for a TOUCHDOWN!!!”

Mrs. Rotegard, my sixth grade teacher, actually wondered on my report card, “What is Yehuda mumbling under his breath?”.

Although I no longer follow professional sports, I still revel at the successes of my hometown teams. You can take the boy out of his hometown, but you can’t take the hometown out of the boy!

Now, about three months ago, I got an itch to return to the Canadian Tire Center (the home of the Ottawa Senators) to attend an NHL hockey game.
I spoke with my friend, Dave, who is a die-hard Sens fan, and I asked him if he thought we could make this adventure come true.

Dave looked into the logistics of the arena (I didn’t want to sit in the corral they have sectioned off for the wheelchair-bound) and requested if I could wheel right into a regular spot. As it turns out, there is a row near center-ice that doesn’t have installed seats. He reserved a spot for me (I bring my own chair), and a folding chair for him.

Upon investigating the Sens schedule, Dave discovered that the Minnesota Wild were coming to town on November 20!

The rivalry had been born, and I anxiously counted down the days until Dave and I went “Head to Head”.

The night before the game, a mutual friend brought me a present. I knew at once the contents of the box – it was a Minnesota Wild jersey!

This was the second jersey that I received as a gift. The first was a Minnesota Twins jersey, given to me by my first sixth grade class (after they saw me play on Lag Baomer) in 2003.

Game Day finally arrived! All decked out in my Wild jersey, I brought along my nightly medications for 9:30 PM. Dave brought the snacks. Unfortunately, he checked with my wife who advised him to bring sugary candies (whereas I would have preferred brownies and cookies – chalk it up to another casualty of not being able to grab what I wanted!). 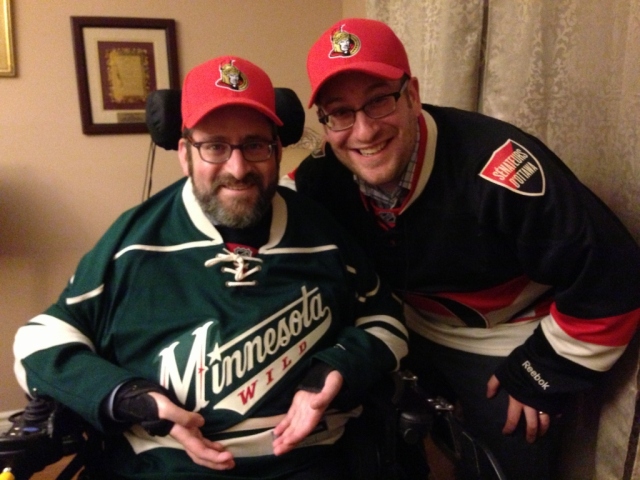 I remember the freezing nights and the long walks from my car when I went to games in the past. I mentally prepared myself for the blasting wind and frozen fingers. To my delight, handicapped parking was literally a few steps away from the arena (there are some perks…).

After settling into our seats, we watched the last part of the warm-up and the count down (build up?) to the puck drop. Truthfully, I didn’t remember how exciting it was to be at a live hockey game sitting in great seats! It’s like being absorbed in a completely different environment – a short break from reality! 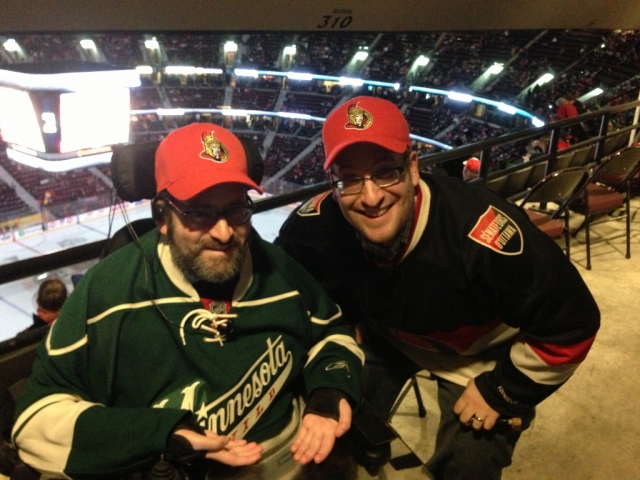 During the first intermission, we took some pictures and walked around. Before we know it, it seemed as if shul had reconvened at the Canadian Tire Center! Now, I’m used to attracting glimpses and stares in public areas, but this was getting to be ridiculous! Every other person seemed to be an acquaintance of ours!

Apparently, the shul across town was having a “Hockey Night Out”, and they were sitting in the very next section! As if that wasn’t enough, the Ottawa Jewish Federation rented out a “box” directly above us, and we received regards from many of our close friends! Sheesh – can’t a guy go to a hockey game without the rest of the Jewish community showing up (just kidding – it was so wonderful to share this incredible experience with so many of my close friends!).

Toward the end of the game, Dave informed me that he planned something special for me. Using his connections, he arranged for a private meeting with Colin Greening (Left Wing for the Senators) in the Family and Friends meeting area! Not that I’m so enthralled with meeting an NHL player – but it makes for a great photo op!

After the game, Dave informed an usher that we were “guests” of Colin Greening. We were escorted with VIP service down below the arena to the central-control-center of the Ottawa Senators!

An official looking employee of the Senators stood at the entrance of the meeting room. He was holding a walkie-talkie, and he was trying a bit too hard to look like a bouncer. Actually, Dave just gave him the “guests” of Colin Greening line – and we were in! 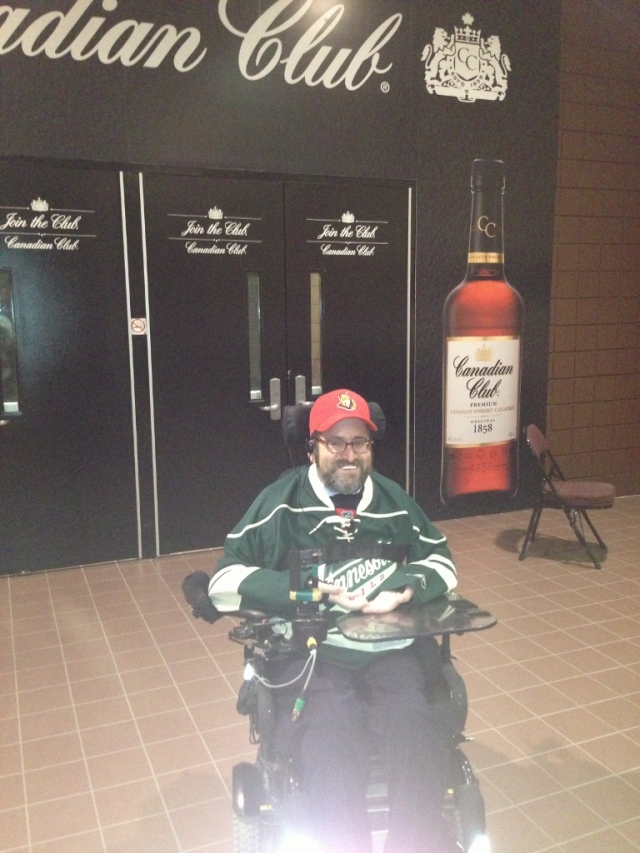 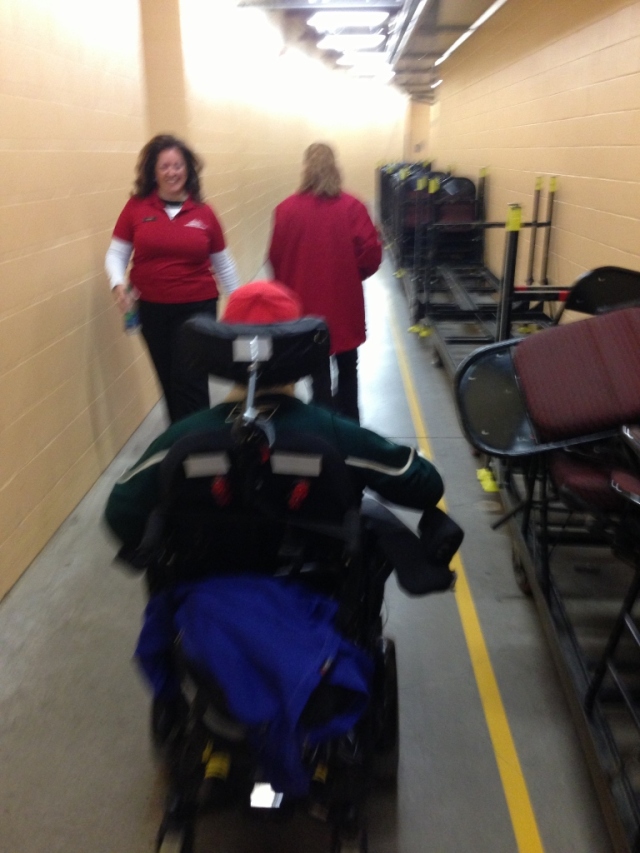 Down the stadium hall. 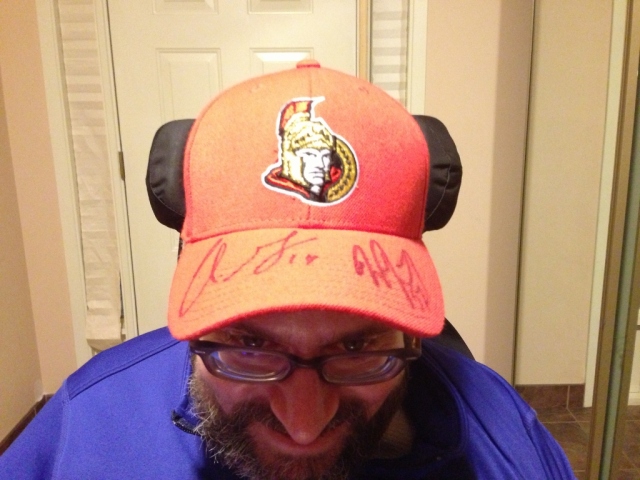 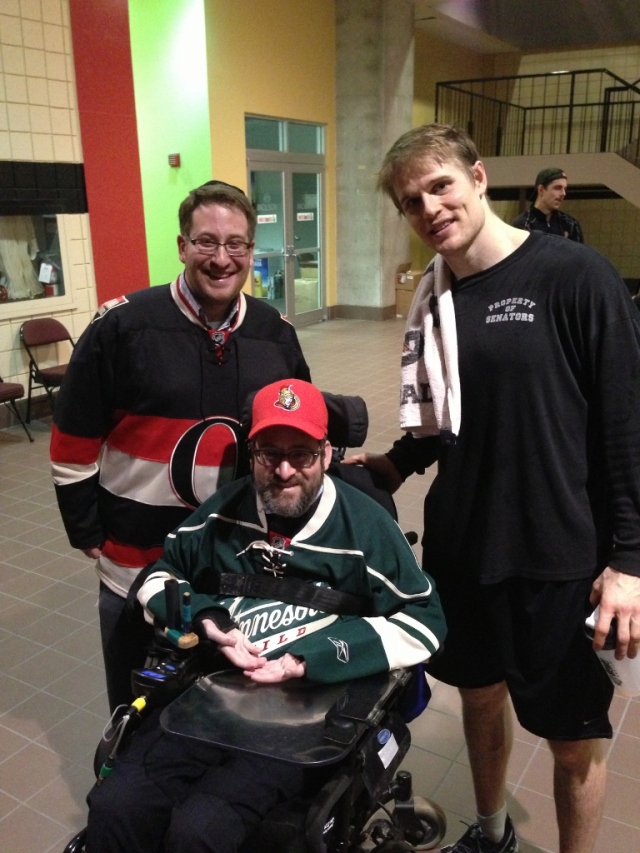 I immediately noticed four men standing around a huge, muscular man. To me, he resembled a modern-day replica of a Greco-Roman hero – extremely tall and perfectly sculpted. They were all casually speaking about the game and what comes next on the schedule. The individual opposite this giant was nearly as tall as he, but a whole lot skinnier. I surmised that this was his father.

I wondered what home-life must have been like at this individual’s home. What road did he travel before making his millions in the NHL? Which obstacles did he need to hurdle on his way to stardom? I was left wondering, when…

The expected individual… THE MAN HIMSELF… THE ONE AND ONLY…

Colin Greening, in flesh and blood, made his grand arrival!!

Now I must tell you, I had planned on sharing a few things with Colin. About how he, and his comrades in uniform, made a real difference in the lives of people. That following sports was not so much about rooting for the good guys and booing for the bad guys, but about an escape from the grueling lives of people. That he actually held the power to transform frigid and snowy nights into warm and sunny days.

But when I saw this young and somewhat immature kid, all wrapped up in himself and “the game”, I felt it would all go over his head that at that moment…

Let’s make sure it doesn’t go over OUR heads!